Citizen automators, we are pleased to announce the Zendesk Sell connector.

Citizen automators, we are pleased to announce the Zendesk Sell connector. Now, you can integrate Zendesk’s easy-to-use CRM platform to the rest of your sales tech stack to drive even more pipeline and productivity. And, since Zendesk Sell easily integrates with Zendesk Support, customers using both solutions can easily track every aspect of the customer journey.

Here’s what the Zendesk Sell connector means for you. While Zendesk Sell already offers a highly streamlined selling experience that removes the friction from deal updates, you can now integrate the CRM to important sales tools, including sales engagement (such as Outreach or SalesLoft) and conversation intelligence (such as Gong.io). And beyond integrations, you can now use the power of our General Automation Platform to orchestrate sophisticated sales processes that involve Zendesk Sell and the other tools in your tech stack with automation to close operational gaps, save time, and empower your sales team to sell more while you take full control of your sales data, even for custom fields.

What you can do with the Zendesk Sell connector

And should you need any additional functionality beyond the above, you can build out more using the Tray Toolkit for universal connectivity.

Next, some specific use case examples for Zendesk Sell integration:

Sales teams frequently get lists of leads from a variety of sources, such as from badge scans at trade shows or from webinar sign-ups. To quickly and efficiently get those leads queued for follow-up from your sales engagement platform, you can integrate your lead list in Google Sheets to Zendesk Sell, then auto-queue follow-up in Outreach after you’ve confirmed the lead owner: 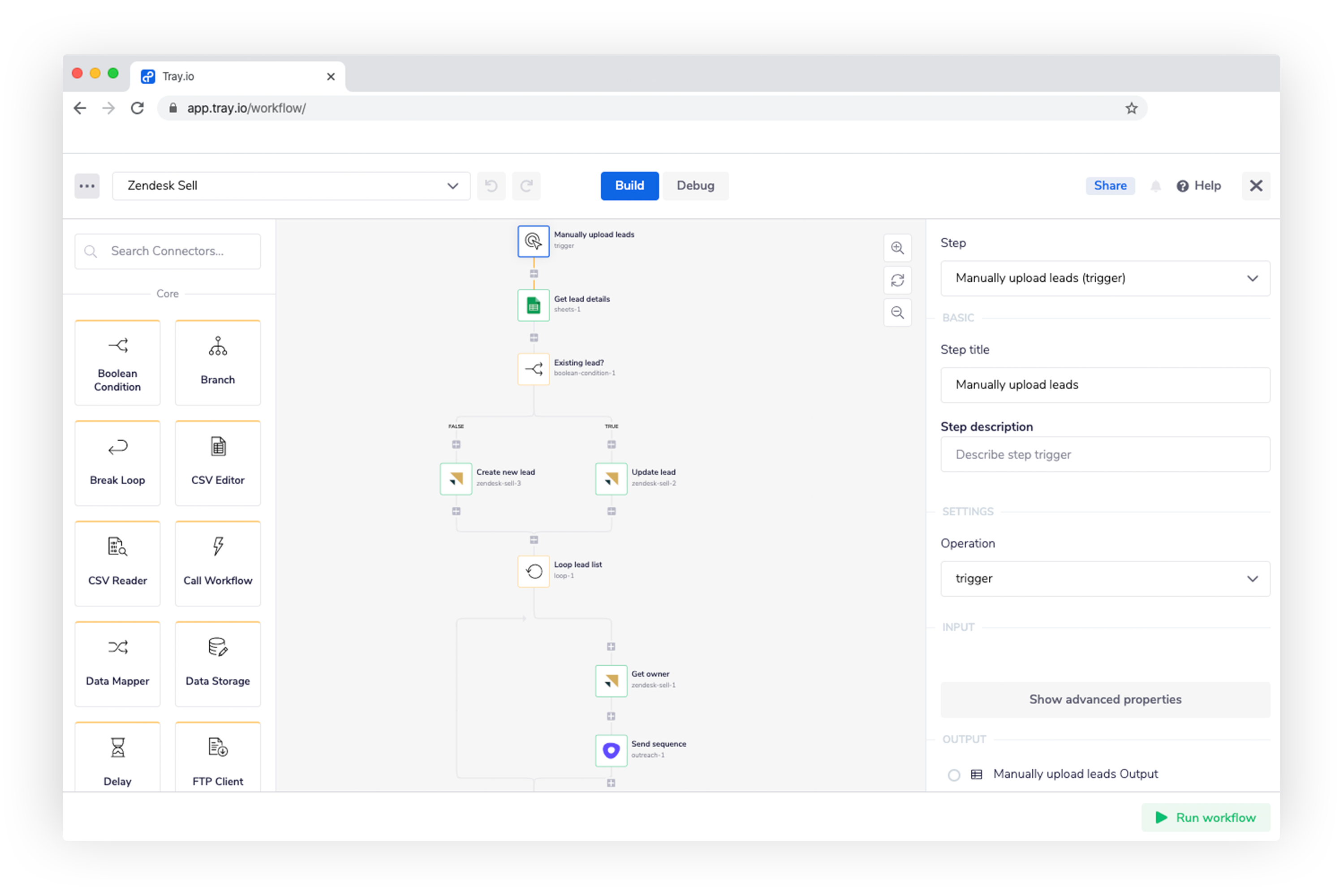 In the above workflow, we use an on-demand manual trigger to auto-process lead lists whenever new ones arrive. We use the Google Sheets connector to pull data from each lead, then run a Boolean “true/false” loop to confirm whether each lead already has a record in Zendesk Sell (if so, we update the existing lead; if not, we create a new lead record). We then loop through the leads iteratively to confirm the owner of each lead among our sales development representative (SDR) team and, once the leads have proper owners, immediately set up an appropriate follow-up sequence in Outreach.

As you may have heard, 50% of buyers typically go with the vendor that responds first. By closing the loop faster and removing the delays of confirming duplicate leads versus creating new ones, we position ourselves to follow up much faster and win more deals!

Another high-value use for Zendesk Sell is keeping tabs on your competitors during sales calls. You may have heard that your sales team can be 49% more likely to win deals in which competitors are mentioned, but only if you establish your brand’s superiority early in the deal cycle. One of the most reliable ways to identify competitor mentions is to use a conversation intelligence tool like Gong.io, which you can integrate with Zendesk Sell and a messaging tool such as Slack. This workflow gives your sales team full visibility into any competitor mentions and auto-updates your records in CRM as well: 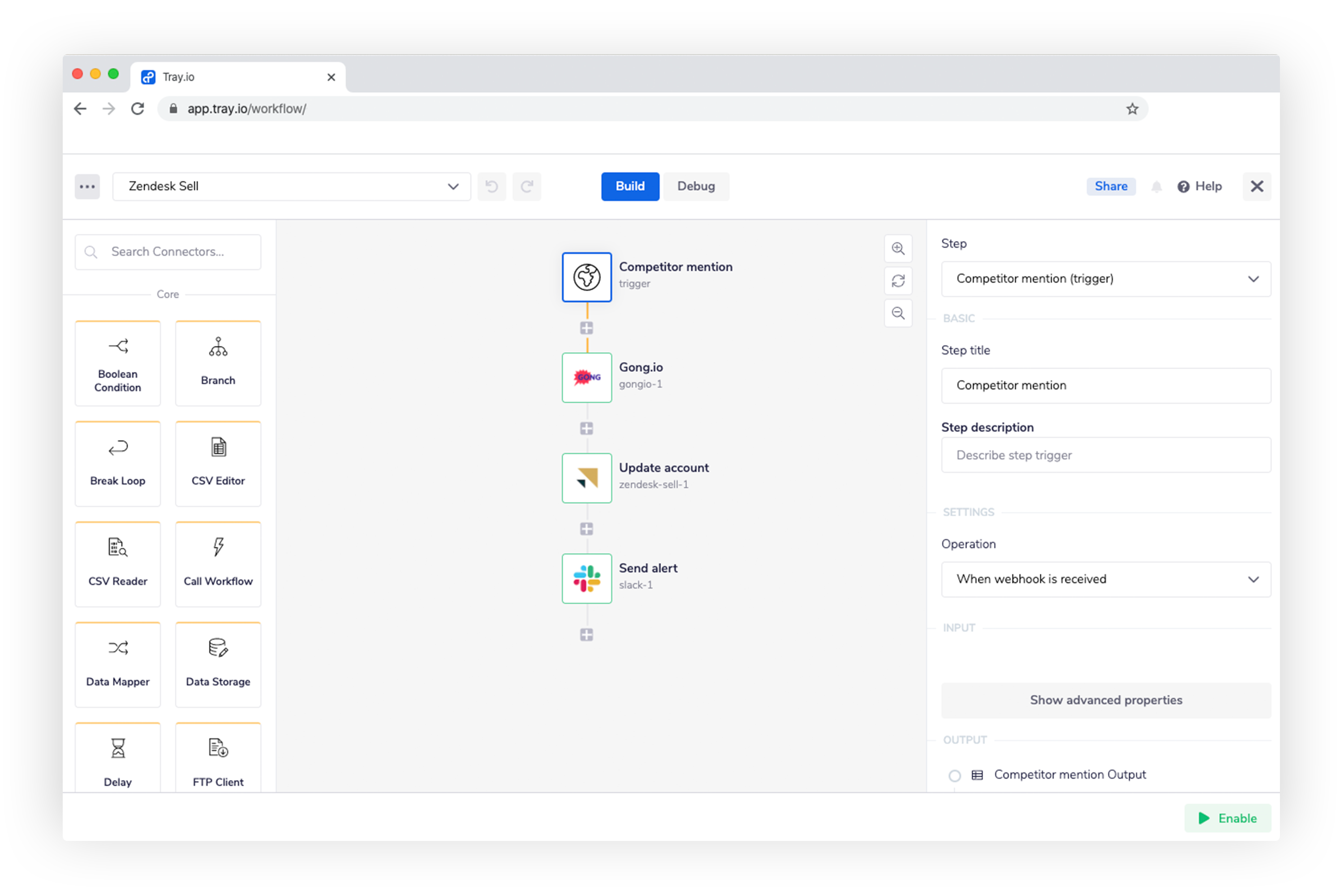 We kick off this workflow with a webhook that “listens” for any mention of a competitor on a sales call. Our automated workflow integrates Gong.io to auto-detect competitor mentions, then automatically appends a note to the account in Zendesk Sell and even sends an alert to our #sales channel via Slack to make sure everyone is aware that competitors may be part of this deal. As a result, our sales team knows to bring in competitive intelligence earlier into the deal cycle and ends up in a much better position to win.

Otherwise, you should now have some ideas on how you can use the Zendesk Sell connector in the Tray Platform to increase your sales productivity, follow up faster with hot leads, and even edge out your competitors. If you’re already a Tray.io customer, log in to the Tray Platform to get started.

Get more inspiration and real-world examples of integrating and automating Zendesk Sell and other essential tools in a weekly group demo.